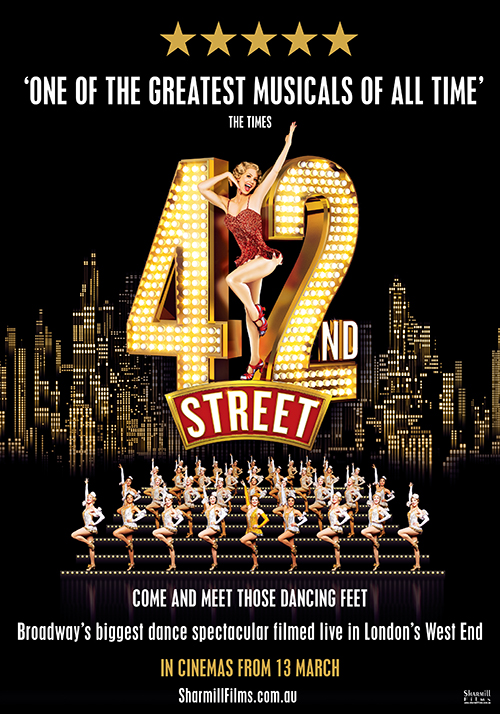 ★★★★★ ‘One of the greatest musicals of all time’ The Times Come and meet, those dancing feet... 42nd Street is the Broadway song and dance musical extravaganza, featuring the iconic songs: ‘We’re In The Money’, ‘Lullaby Of Broadway’, ‘Shuffle Off To Buffalo’, ‘Dames’ and ‘I Only Have Eyes For You’. With the show’s largest ever staging, this is a musical like no other. Entertainment doesn’t get bigger than this. April 3rd 1933, Young Peggy Sawyer is fresh off the bus from small-town America and just another face in the chorus line of ‘Pretty Lady’, the new Broadway show to be directed by the legendary Julian Marsh. But when the show’s leading lady, and resident diva, Dorothy Brock is injured, Peggy’s dreams of stardom might just come true.Originally directed and choreographed by American star of stage and screen Gower Champion, this revival of the Tony and Olivier Award® winning tap spectacle is directed by co-author Mark Bramble, and comes to you from its West End spiritual home, the Theatre Royal Drury Lane.

CLASSIFICATION: E - Exempt from classification  DURATION: 2hrs 30 mins (previous advertised duration was incorrect) TICKETS All tickets $25 plus transaction fee SPECIAL SENIORS WEEK SCREENING Wednesday 21st April at 10am All tickets for this session are subsided and are only $10 each plus transaction fee
© 2021 Cowra Civic Centre