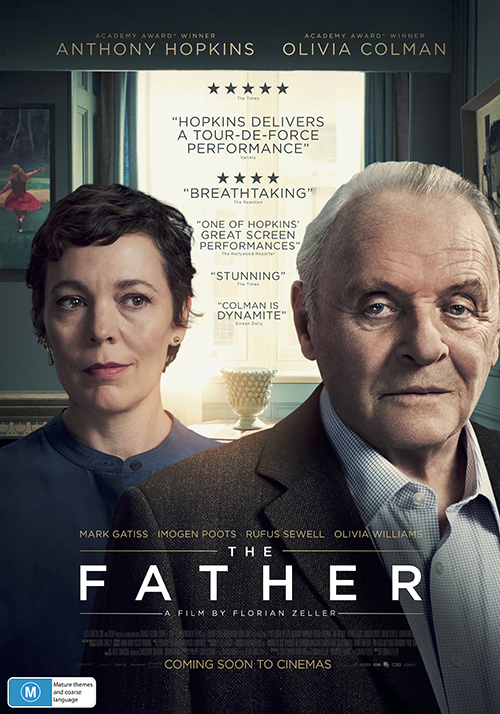 “Anthony Hopkins gives one of the most vulnerable and emotional performances of his career.”- RogerEbert.com “Bracingly insightful, subtle and nuanced… This will certainly go down as one of Hopkins’ great screen performances.” – Hollywood Reporter “Hopkins is flat-out stunning.” – Variety ﻿“Anthony Hopkins and Olivia Colman are astounding. The Father is a testament to their talents and proof that they are two of the best actors we have.” – AwardsWatch In The Father Academy Award winner Anthony Hopkins (The Remains of the Day) plays the eponymous role of a mischievous and highly independent man who, as he ages, refuses all assistance from his daughter Anne (Academy Award winner Olivia Colman). Yet such help has become essential following Anne’s decision to move to Paris with her partner. As Anne’s father tries to make sense of his changing circumstances, he begins to doubt his loved ones, his own mind and even the fabric of his reality. The Father is drawn from the stage play of the same name, which was written by Florian Zeller and launched in Paris in 2012, winning the Moliere Award for Best Play, before hitting Broadway and London’s West End winning further awards. Writer/Director Florian Zeller has adapted his multi-award-winning play long with Oscar-winning screenwriter Christopher Hampton (Dangerous Liaisons, Atonement), earning critical acclaim at the Sundance Film Festival, and winning the Audience Award for Best Film at the San Sebastian Film Festival. Featuring an all-star cast that includes Mark Gatiss (Sherlock), Imogeen Poots (Green Room), Rufus Sewell (Judy) and Olivia Williams (An Education) in one the year’s most acclaimed films that critics are calling “a landmark film” (Entertainment Weekly). The Father is “a beautiful riveting first feature by Florian Zeller with master performances by Sir Anthony Hopkins and Olivia Colman” (Huffington Post) that Variety is predicting to be a major contender at the 2021 Oscars.