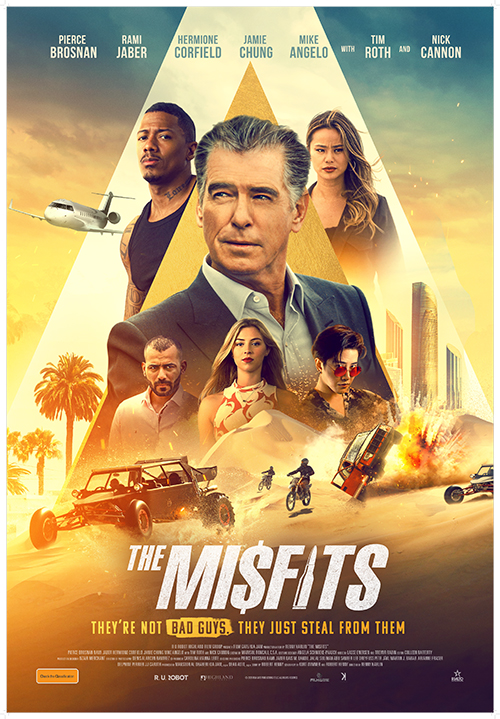 Richard Pace (Pierce Brosnan) is a thief, plain and simple. And while he prides himself on only stealing from those who have insurance so that nobody gets hurt, he has caused hurt in his own life. His wife has left him, his daughter resents him, and to add insult to injury, he has a tendency to get caught. But he’s also quite adept at breaking out of prison, particularly privatized prisons built and run by a man named Schultz (Tim Roth). When we meet Pace, he is once again breaking out of one of Schultz’s prisons, only this time he’s not only on Schultz’s radar, but on that of a band of modern-day Robin Hoods who go by the name The Misfits.   After a high-octane breakout from prison and a car chase through the streets of Los Angeles, The Misfits offer Pace a chance to avoid the FBI by joining them. With the feds closing in, he can either go back to prison or board a private jet to Abu Dhabi. Pace calls it kidnapping, The Misfits say it’s a chance to do right for once. Tomato, tom-ah-to. On board, The Misfits explain that Schultz has had enough of Pace’s shenanigans and is out to kill him. But they have a plan that can get Schultz off his back and also do some good in the world. It’s going to involve terrorist organizations, a long-lost daughter, The Muslim Brotherhood, forged identities, laundered money, explosives, camels, some bad chicken, and a cache of gold hidden at a prison in a terrorist hot bed. And they plan on stealing it. It’s not as simple as it sounds, but is as funny. And if they can pull it off, they may not only save Pace’s life, they just may prevent some terrorist organizations from taking more innocent lives.   The Misfits is a heist film in the vein of The Italian Job and Ocean’s 11, meaning there is a lot of action and even more humor. Our cast of characters are good natured and fun, and the guys they are stealing from are… let’s just say we’re rooting for this particular band of misfit thieves. And what will become of all the gold they steal if they pull this off? Probably something really good for humanity, cause these guys are Misfits, but their hearts are as gold as the bars they plan on stealing. Classification: M - Crude humour, violence, coarse language and drug use Duration: 94 mins