Cowra Civic Centre Cinema THE POWER OF THE DOG 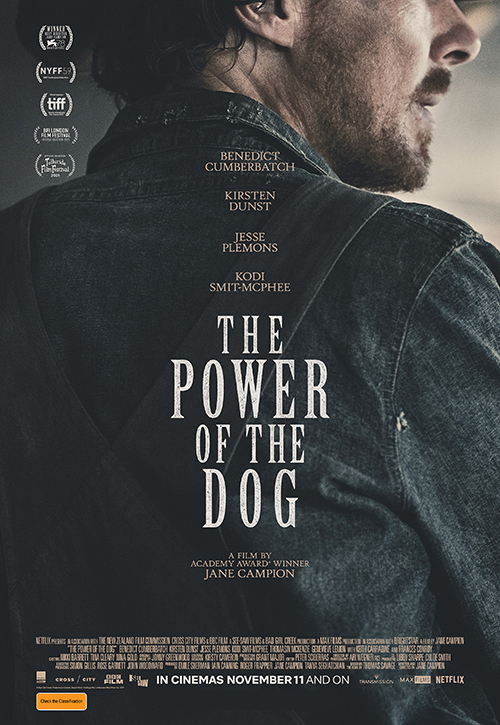 ★★★★★ "a triumph for Jane Campion and Benedict Cumberbatch...The pair have united to deliver an indecently powerful western...and indeed the frontrunner at next year’s Oscars" - TIMES UK ★★★★★ "It's a film which shimmers with intelligence" - BBC.COM ★★★★★ "a career-best performance from Cumberbatch" - DAILY TELEGRAPH UK ★★★★ "Incrementally, by degrees, Campion shows the ways in which the men who set out to tame the frontier have instead been broken and bent to its will" - GUARDIAN ★★★★ "Cumberbatch's magnificently unbridled nastiness deserves to be enjoyed on the biggest scale possible" - FINANCIAL REVIEW Awarded the Venice Film Festival Silver Lion for Best Director (Jane Campion). Severe, pale-eyed, handsome, Phil Burbank is brutally beguiling. All of Phil’s romance, power and fragility is trapped in the past and in the land: He can castrate a bull calf with two swift slashes of his knife; he swims naked in the river, smearing his body with mud. He is a cowboy as raw as his hides. The year is 1925. The Burbank brothers are wealthy ranchers in Montana. At the Red Mill restaurant on their way to market, the brothers meet Rose, the widowed proprietress, and her impressionable son Peter. Phil behaves so cruelly he drives them both to tears, reveling in their hurt and rousing his fellow cowhands to laughter – all except his brother George, who comforts Rose then returns to marry her. As Phil swings between fury and cunning, his taunting of Rose takes an eerie form – he hovers at the edges of her vision, whistling a tune she can no longer play. His mockery of her son is more overt, amplified by the cheering of Phil’s cowhand disciples. Then Phil appears to take the boy under his wing. Is this latest gesture a softening that leaves Phil exposed, or a plot twisting further into menace? Cast: Benedict Cumberbatch, Kirsten Dunst, Jesse Plemons, Kodi Smit-McPhee Director: Jane Campion Classification: M - Mature themes Duration: 126 mins Tickets $14 plus transaction fee